Buying a Bow: The Next Step of My Rewilding Process 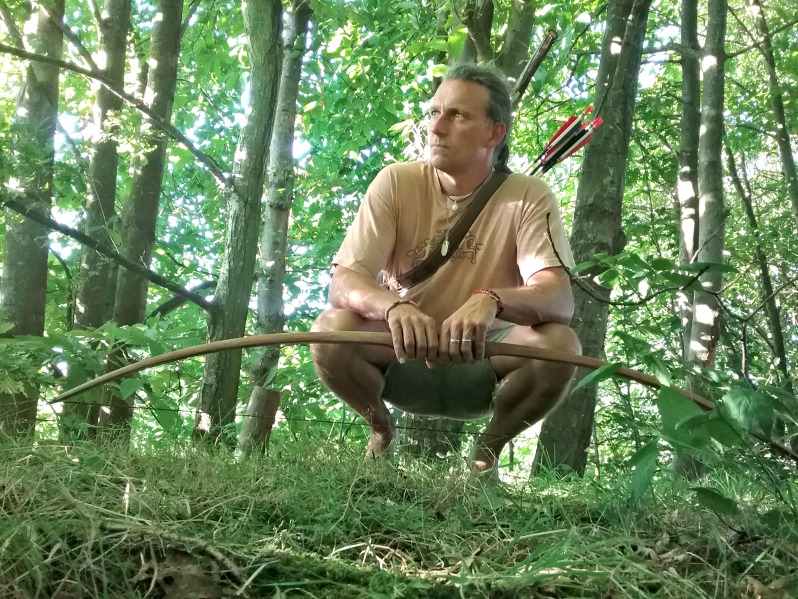 Those who have never played with a self-made bow when they were kids, raise your hands. I’m thinking there won’t be many of you.

A bow has something magic – it’s powerful, beautiful and straight-forward.

At the age of 47, some buy a Harley. I bought a beautiful traditional wooden longbow, the next logical step in my own rewilding process.

I have always had a special interest in bows and arrows. As a kid playing in the woods, I rarely went outside without my self-made bow and arrows. More than twenty years ago I bought a Winchester 30/30 to take on my expeditions and adventures. But once back in the city, there was almost no occasion or reason to use it.

A bow is a different story. Recently, I decided to buy a 58-inch 35-pound traditional wooden bow. I decided on that size for two reasons:

1) I was explained by some professionals that 35 pounds is good for practicing since it is not too heavy to pull over and over again.

2) The 58 inch was one of the shortest wooden long bows I could find. I like a bow to be light and short to be able to move swiftly within the woods.

To me, a bow has all the elements of a rewilding lifestyle:

In hunter-gatherer societies, the bow is undoubtedly linked to diet, being a hunting tool. I gather edible plants and herbs together with Kiki. In the future, hunting and fishing are also on the list, but in the right place, at the right moment, and only for food.

In the meanwhile, shooting a bow and hitting the target makes you realize how difficult bow hunting must be. It gives you an idea about how much effort it takes to put the necessary amount of calories on the table when hunting and gathering. It’s definitely a different ballgame than going to the supermarket and filling up your shopping cart.

I like to combine MovNat workouts in combination with archery. In the future I would love to get into 3-D shooting.

Moving around in thick bush, approaching a target in complete silence is always a good workout. Also, the aiming and shooting itself requires both mental and physical self-control.

When concentrating on hitting the target, nothing else is of any importance. You totally disconnect from the usual rat-race, and reconnect with your own wilder self.

On the other hand, practicing bow shooting is great fun, especially when done in group. At rewilding drum, we invite people to play. We encourage them to fool around, have fun, and play with their kids, their family, and their tribe. It’s good for the family.

In hunter-gatherer societies ‘hunting games’ were common, both for fun and for practicing the necessary skills needed to take down large animals. They were also good for tribal bonding.

The bow seems to have found its place within the bushcraft and survival scene. More and more bushcraft enthusiasts are discovering archery.

Danny Reid from the Bushcraft Journal confirms this:

“Something I have noticed over the past few years is that more and more people seem to be taking an active interest in learning the skill of archery. I myself have had a fascination with the subject for as long as I can remember, possibly due to the fact I enjoyed reading about Robin Hood as a young boy and watching TV programmes and movies about him and the adventures he and his merry band had. But I wonder if it’s something deeper than that? I wonder if it is something ingrained within us from our days as hunter gatherers. A time when we were dependent on having the ability to track, hunt, kill and process our own foods for survival? This is something I have been thinking about for some time and almost every time I line up to take a shot at a target whilst practicing. You see, I use various-sized animal paper targets and nearly always instinctively aim for a kill shot.

I think that with such resurgence in modern times of people wanting to rekindle long practiced living skills, and gain a better, stronger understanding for the natural world, with that goes hand-in-hand the deep grained skill of hunting. Not for sport mind, I can’t abide that as I have too much respect for the natural world, but for the ability to put food on the table or around a fire for our families.”

My own rewilding process, an ever ongoing process as far as I am concerned, made me look closely into the lifestyle of hunter-gatherers, nomadic people and first nations in general, who intrigued me since I was a little kid.

Living in a city, I don’t hunt for my food. But I still see mastering hunting skills as an important part of the aforementioned process. Over the years I have been practicing stalking, mostly deer. The “shooting” is replaced by taking pictures.

To me it’s not at all about shooting the most beautiful picture, it’s about approaching the animal without being heard or seen.

By purchasing a bow I want to take it a step further. Shooting a bow has been done by thousands of generations of mankind, and is, I believe, a skill which shouldn’t be lost.

Belgian 2-D and 3-D archery champion, Steven Dijlst, puts it like this:

“Focus on technique first, distance comes later. And then,

So, what do you think? Are you curious about archery?

If so, ask for some good advice before purchasing archery equipment. My recommendation would be to start with a simple, inexpensive bow, and get a feel for it. Once you are more experienced, you can go for something more sophisticated (or not!).

It may also interest you read: